I started doing changes to my gear system and related ones, but I kind of left them half-hanging. So let me do some of that (while I consider what to do with new 3D collision and lighting stuff). The main goal is to have them actually dropped/distributed to the player.

I got rid of all the equipment slots (except three: armor, utility and booster). And I am also getting rid of “default” item. Currently, the player drops their default bonus-less item when they find some gear. So I’m back to empty slots at start. And the slot definition is just the slots now:

I added some placeholder items to fill out the gear list:

And some placeholder sprites for them all:

So now my gear items use the specific sprites and outlines, just like the regular items, meaning I can (theoretically) drop them in the world:

I am also adding a rarity value to the items, so that I can apply some additional coolness to the weapons.

Since I won’t be listing many weapons properties in UI and the player won’t be acquiring them permanently, I want a quick way for the player to see if something is better. A rarity color seems like a very quick and good way to do so. I even considered doing multiple rarity levels for item categorizng, but we’ll see: 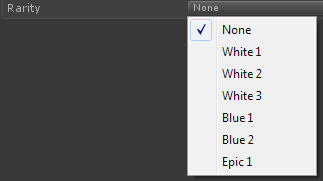 I can then make a bunch of assets for potential items:

And I can put these in the level loot selection/drops, specifying which ones appear in which levels (by rarity or some such):

Then they can (finally) spawn in the game:

One issue with removing always-equipped gear slots is that my animators somewhat broke as they expected an item for each slot, at least a “default” one.

So now I need to readjust my animators and have the gear items specify which animation setup they alter, if any: 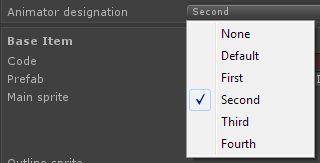 Then the animators can go through every type of slot and every designation and specify the sprite and other options that should be used: 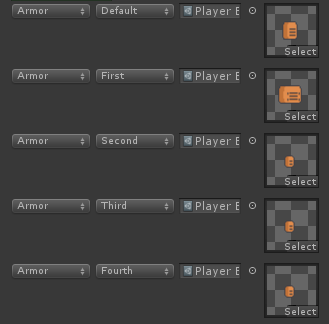 And the animator can select the right sprites:

It’s all a little convoluted, but it works and it’s somewhat easier to specify all this than hardcoding.

And these appear (replace the defaults) in the game:

I don’t know if I will have that many sprites for these. I will likely use the same sprite for dropped item as for equipped on. We’ll see, because this largely depends on art assets.

This all took some time, way more than I’d want, as always. I have some ideas for gear balancing that I will cover next.