I want to observe and discuss resources as they appear in real-time strategy (RTS) and similar video games. Specifically, I am interested in collectable (harvestable, gatherable, acquirable) resources and their implementation from the gameplay perspective. It does not matter if you are mining minerals, chopping trees, or collecting spacenuggets; this is about the method and the fun (or tedium).

“Physical” resources are such that some physical object in the game world changes as a direct consequence of the player acquiring the resource. In other words, for an RTS, something in the overworld either appears or disappears. In human terms, if you were in the game you could “touch” either the resource’s source or the resource itself as it was being collected.

Much of the diversity and strategy of RTSes comes from the specific way in which each physical resource is distributed in the game environment; so this is how I will primarily differentiate between physical resources. This entry will discuss how the vast majority of resource types can be grouped using two simple metrics — by the 1) distribution in an area and by the 2) available quantity.

1) The distribution across the area can be either scattered (“multi-point” or continuous) or discrete (“single-point”), for the lack of better terms. This means the resource is either scattered across a larger area relative to game’s actors (units/structures), or exists as a single source/structure. Of course, there are some examples where it is hard to draw such line.

2) The quantity simply refers to either depletable, renewable, or infinite resources. 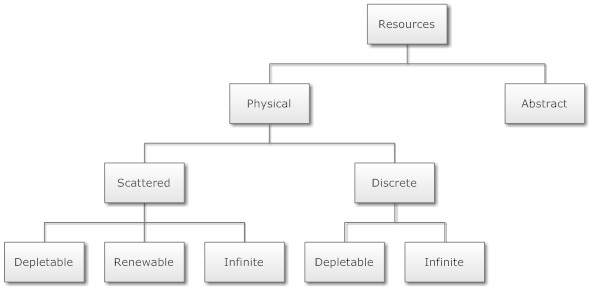 Now let’s look at each group and examples below.

This is possibly the most popular method of allocating at least one primary resource. The map has an area of a certain resource, and the player has the means to acquire it. The faster you gather, the faster you deplete it; and there is no way to restore it. This is a crucial point in gameplay, which forces the player to both explore the world and plan ahead before their resource areas are emptied by the opponents.

The first great popular example and pioneer of RTS’es is Dune II (1992):

Ahh, the first RTS I ever played. Dune has only one physical resource and it is “spice”, converted to “credits” once delivered by the harvester unit to the refinery. The player has to explore the map, find additional spice fields, and protect the harvesters. Once there is no more spice left on the map, no more credits can be acquired and the game can even enter a stalemate.

It had great atmosphere from subtle lighting to great score. Though this is more likely nostalgia speaking and the game may not be the best in the series. Anyway, similarly to (exactly like) Dune II, once in-game “tiberium” crystals are harvested and spent, they cannot be restored. C&C multi-player is especially famous for player control and harvesting of the limited tiberium supply on the map. In fact, the whole (Tiberium universe) series plot centers on acquisition of valuable tiberium.

Among many resources, the player can build quarries, which are occupied by a stonecutter who gradually mines out the surrounding stone piles. Once all stone is mined, the building becomes useless. However, in contrast to Dune, this creates additional, often needed area for construction. In Dune spice is located on sand, and the player cannot build on sand. In Settlers, rocks are generally found on grass and once mined, new buildings can be constructed in the area.

The second big RTS I ever played. “Work, work.” Peons and peasants would cut down the forest tile by tile, “freeing” the land. Lumber, along gold and later oil, was one of the main resources for construction and unit training.

And what would these examples be without the famous StarCraft (1998):

Several units can work on a single resource for some time before it is exhausted. However, in contrast to all previous examples, the units do not need to return to the base to deliver the goods; resources are automatically collected as long as the units are working. 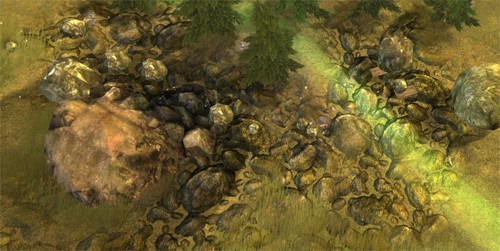 Now, Black & White is an interesting and innovative game (yes, that sometimes happens in a triple-A title; albeit heavily borrowing from previous Populous [1998]); where the player plays as a god in control of a village and surrounding area. The player village’s workers can gather ore from rocks around a mine or work in the mine itself. Additionally, the players can themselves move the ore to village’s storehouse; albeit rather tediously and a bit inefficiently. Nevertheless the game presents resource gathering as a really fun feature, when you first encounter it. Of course, it gets old soon, and a few maps later you are back to “click worker to work at mine” or “just let them sort themselves out” routine of every other RTS.

Another quite unique example is Dungeon Keeper 2 (1999), where player’s minions dig up the surrounding soil: 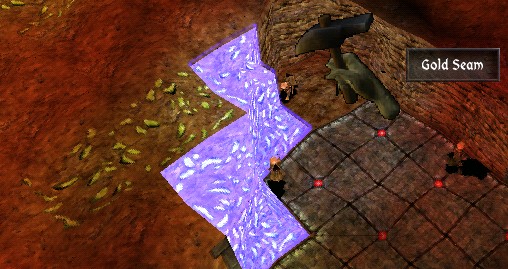 The player selects which blocks to mine and imp worker proceed to dig them out. The only resource is gold (discounting mana), acquired from gold ore blocks (gold seams). Nevertheless, the idea is interesting.

Anyway, there is a plethora of examples, so let’s move along, shall we?

Renewable is a resource that can be gathered like any other, but can also be restored by the player to its raw, uncollected form. This is typically something that is planted and grows over time.

Now, quickly depletable resources are fine for “action” RTSes, where clicks-per-second and combat are more important. In contrast, a game of Settlers can take a half-dozen hours to complete. For renewable resources, Settlers 2 is a great example of lumber production: 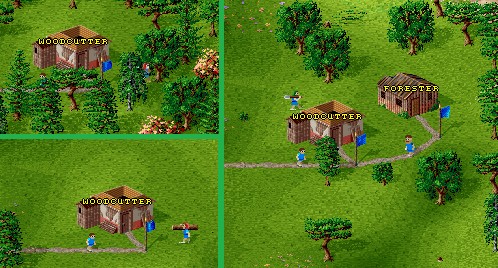 The player can build a woodcutter and soon the surrounding naturally grown trees will all be cut down for logs, freeing the area. But at this point, the player can construct a forester’s hut, who will continuously plant new trees for free. Working together, this combination will produce an infinite number of logs, only limited by the speed of production. The strategic aspect is to manage the area size and woodcutter to forester ratio required for efficient harvesting in a given area.

Similarly, the principle applies to resources the players have to produce themselves before harvesting, such as wheat in Settlers IV (2001) or Settlers II:

The wheat fields require a grass layer and take up a lot of space. In Settlers IV wheat grows best on fertile land. Plunking ten farms next to each other would be almost useless in this case.

I don’t have many examples of renewable resources. From the few I’ve seen, I think they are interesting in terms of gameplay reward. The player creates something from “nothing” and that is in a way more rewarding than obtaining already existing resources. The downside is that the player does not have a clear objective. A spice field in Dune is a clear, immediately obvious goal. So I guess it is all in the balance.

Finally, resources can be scattered across the map, but would provide infinite supply, for example, timber harvesting in Rise of Nations (2003): 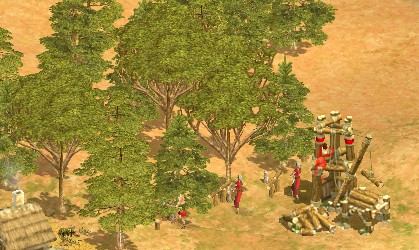 Once a woodcutters’ camp is built, nearby resources are automatically assigned to this structure. To start and then speed up the harvesting, the player sends more workers. The forest size never changes and the woodcutters’ camp can be built at any nearby location. So, from the player’s perspective, the resource is distributed in a wider area.

This is seen in RTSes that don’t want to be bothered with depletion of crucial resources. The resources (like trees or mountains) also serve as terrain features and map decoration.

Now we come to the second most popular method — a single location of a depletable resource. A discrete source or building, where units come to retrieve the resource. There is only one or very few sources in a given area. The most illustrative example is probably the gold mine in Warcraft II:

Peons/peasants will go to the mine and bring back gold to the nearest base until the mine is exhausted and collapses.

Or the famous vespene gas refinery in StarCraft II [2010]:

In Starcraft, SCVs can still harvest gas at 75% reduced rate after it is depleted; in StarCraft II depleted Vespene geyser is useless.

This is a lazy way of implementing resource harvesting. That said, it doesn’t mean this is a bad design decision. After all, Warcraft or StarCraft are prime super-successful examples of how this can work very well in balance with other resources.

Infinite resources are characteristic of economic simulators (tycoons) and various transport games and less seen in RTSes, unless it is one of many resources and the game doesn’t want the player to micro-manage depleting resources.

An RTS example is oil gathering in Rise of Nations:

Once built, the oil wells will constantly produce oil, as long as there is a worker. Because oil becomes available later in the game after timber and metal (and food/farms), it works well enough. If a little contrary to the real life.

Similarly, in Age of Empires II food can be acquired from wild animals found ranging on the map, but also a farm/mill can be built for a constant, infinite supply:

This demonstrates a very nice strategy point for RTSes. Naturally available resources slowly run out and the player must build his own means of increasing those resources. At the same time, as time advances, the player starts to focus on units and warfare, thus resource gathering becomes less involved.

Transport Tycoon focuses on transportation chains and competition, and almost all primary production industries (farm, coal mine, forest, etc.) constantly produce resources. The economy and the monthly production per industry can fluctuate over time; and occasionally an industry may even close or a new one can open (or be built in OpenTTD). But, in essence, once a transport route is built, the player does not need to worry about it too much and can build and expand other routes. This is great, as you slowly watch your transport empire expand.

Although the industries themselves in Transport Tycoon are a single structure, the player is allowed to build the station at any location within the accepted cargo delivery range. Even multiple stations by different players can also be built. This is usually not true for RTSes with a single resource location — only one player can gather it at a time. This removes a lot of strategy that multi-point resources have.

Finally, I have skipped a “renewable discrete” category, as such is essentially an infinite resource that regenerates itself. There is no real difference, because any “infinite” resource is still limited by production or collection rate. And it has to be limited. Otherwise, building a power station that would provide infinite power for the rest of the game is just a very funky way of saying that the power station is a prerequisite for other buildings.