I left off with a bunch of unfinished animation stuff, so I should do some of that that now. As with most stuff now, it’s many tiny features and fixes, all tedious and fairly boring.

There is one thing I want to add to my mobs and that’s a drop shadow. It just feels nicer when enemies are “grounded” and there’s a clear indicator where their center of mass is. This is especially important for flying mobs. I’ll just go ahead and add an asset where I can define my shadows:

And fill it out with some entries for different-sized shadows: 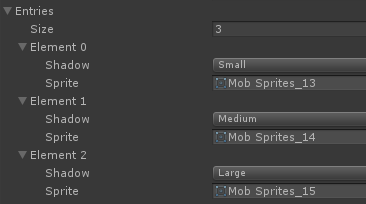 So the mob definitions can specify which one to use:

And then add another sprite renderer to the mobs and have it show the relevant shadow:

Of course, in actual game I will make this much more subtle: 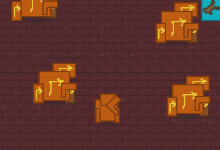 And with flying mobs:

Another big feature my animation system is missing is cross-fading. When the animation state switches, the parts instantly snap back to their desired position. However, this may not be close to where the previous animation stopped. What I need is cross-fade: gradually move between the two positions instead of snapping. So, after a bunch of code, that works decently:

And similarly to rotations (the jet gradually rotates instead):

With some parameter and timing tweaking I can completely avoid any parts jumping between positions and this really makes them feel much better than if they didn’t.

Also, my current death setup is a bit silly:

Essentially, all the prop parts the mob drops are just and exact copy of their mob parts. So I just got rid of that and made it automatically drop a “part per part”. Small change, but I no longer control each part dropping individually. May be it’s for the best as consolidating and trimming features is something I need to consider.

I don’t really know how to animate tank tracks without changing the sprite itself. I won’t do any sprite-based animation just now, so I’ll leave it as is for now. There’s a lot I can do with animations, but I think I will wait until I have some better art direction before I add any more functionality.