A lot of the work I need to do is incredibly tedious and at the end, there’s hardly anything to show for it. I guess I’ll cover some content addition. I think some new weapons is a good start.

As I’m adding and testing weapons, it gets really cumbersome trying to equip them with random buttons for hard-coded weapons. So I am adding a button on the definition inspector to quickly equip it when the game is running:

This makes it so much easier to test these, since I can edit the definition at run-time.

So let’s add a few energy-based weapons, since I have very few of those and I hyped up all the ballistic-energy balance stuff. Basically, something that (potentially) shoots colored pew-pew projectiles and looks cool doing it.

Let’s start with a Beam Cannon:

It shoots energy “balls” fairly rapidly. It’s precise at first, but gets increasingly inaccurate (kind of like the minigun). Then a reload to “reset momentum”. It punches hard but is hard to control.

It’s an energy shotgun and that’s pretty much it — just a variation on a shotgun, an upgrade. Easy enough.

Next up, Laser Cannon (can you tell I’m running out of names?):

I have a single rocket launcher, so how about a Cluster Launcher:

This shoots 5 rockets per shot (uses 1 rocket ammo per shot). If the player hits them all, they are more powerful that the regular rocket launcher. But it’s also harder to miss with multiple rockets. So a balance of risk-reward.

Speaking of rockets, I never actually drop them in the levels, so I might as well add them (to my generic trash loot, for now):

I need a new item type — ammo. For now it’s just rockets, but I could have more types in principle. And these spawn in the world nicely:

Somehow seeing just another item to loot makes it feel like I’m getting awarded with something extra… Even if it’s just ammo.

Rockets are supposed to be super-powerful but limited. All the other weapons have infinite ammo and only require time and skill plus endurance to use. Rockets are your super-weapon you can hoard and use for that “oh crap” boss moment. Assuming you want to carry them and not use them in regular combat.

Now, one this about rockets is their explosions don’t leave anything behind in the sense that they leave pristine floor with no sign of an explosion. We need to fix that and make sure the room looks properly “exploded” if the player fires rockets. I will not do any actual destruction of wall or such, but I can add decorations or “decals”. For that I will go through my usual entity pipeline and add all the usual suspects:

Including an asset for a simple post-explosion blast grime.

Then I can tell my effect bundles to spawn a decal wherever they are spawned:

So any explosion effect will also automatically spawn a decal on the ground:

In fact, this easily translates to mobs, who can die and leave a decal below them: 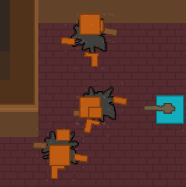 One problem is how the look on walls (horrible):

I think that if it hits a wall, I need to spawn an appropriate angles wall version. The problem is this adds 4 more sprites (8 if I do corner or even 12 if I do convex corners). I’ll leave it for now.

Well, a shorter post, but at least I’m getting something done! As always, I strayed from original task as I discovered all the auxiliary pressing matters.