I decided to do all the art myself. This is probably a bad idea©. But I really just want to get this published. My couple month project is yet again spanning into half a year. There is no way I can bring an artist on the project and somehow improve the release schedule.

So, without excessive ado, here’s the bipedal junkbot:

I have these, as before, in modular parts:

As I’m making new ones, I realize I need some sort of guideline and/or reference point for where the ground is, so I added a helper background sprite while making and aligning the large junkbot version:

So I can see when things don’t quite align (2x zoom here):

I think animations look decent with my modal parts:

I also added tank track sprites for my tankbots:

And a hover jet for my hoverbot:

But the problem here is really distorted pixel art and I don’t like it at all. So I’m removing any rotation and angles from mob animations. It will have to be vertical:

And a bigger version:

There are far from perfect and I could spend ages adjusting them. If I have time an inclination, I will do so later. For now I just want them “good enough” that I won’t stop myself from pushing that “publish” button.

SO I’m slowly adding enemies and sprites, and here’s a productivity issue I have. I want to make my boss have 4 legs (I will cover bosses in a later post):

I want them all to move. But I find myself doing the same tedious animation curves and values over and over:

I have way too many animators for just the few enemies and I really don’t want to make these for each:

In fact, I want a common asset that defines all the common animations (and if it’s not common, do I really need it?):

So this asset can now specify animation for specific cases, like stepping with right and left leg: 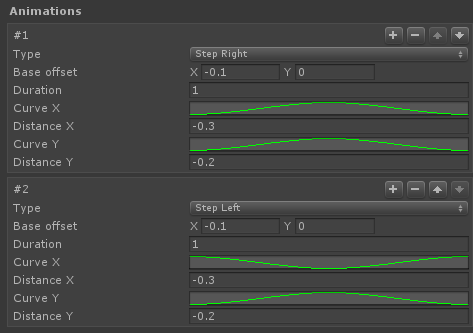 All the curve, offset, and distance values are set here and are shared between any mob animator that wants to walk:

In fact, I am never using separate sprites either, so I can make it even simpler:

Just specify the animation and you’re good to go! Even that -0.1 offset can live in the main logic.

The only “new” thing I need is some sort of scale. After all, big bots have bigger legs and small bots have smaller legs. But before I go adding more float values I’d need to change in each setup, I’m just going to do the same sort of generic selection but for a “modifier”:

And store the corresponding values in the common animation asset: 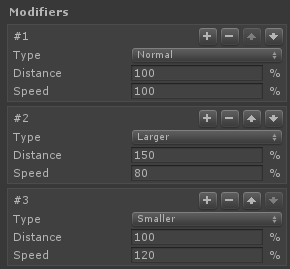 That makes reusing animation incredibly easy. It makes tweaking them much easier, if not individually previewable quickly. Unique animation would take extra time though. Compromises.

I can then add hover for idle/movement for the torso and head:

I can specify some modifiers, like larger/smaller (for size) and quicker (for movement) hover and it’s done — I don’t have to mess with curves for any more animators.

And this works out decently (here, large bot with large step and quick hover):

Anyway, all of this took quite some time over many days even though it compresses into a shorter blog with mostly images.