Blog post #100! Will it be special? No. (And I totally didn’t make this exact joke in last post.)

So I previously have removed/suspended all my UI-heavy features — upgrades, unlockable and changeable loadout, goals. Of the four player information UI/HUD panels, I only have the (unfinished) stats tab left, which is now basically the current loadout. So I need to get that working and presentable, because I currently don’t have a way to properly explain to the player what gear they have and what it is or does. I would love to actually implement all the other features too for all the reasons I previously listed, but I am running out of time. I need to get this working fully before I commit to any new features. If I do do them, then I will need to design them UI-first, because UI is wasting literally weeks.

So the basic loadout preview looks like this (ignoring the totally wrong order): 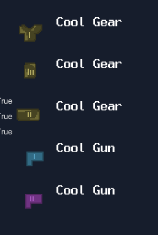 Now I have to display all the actual info from the item… which I don’t yet have. For example, it would be nice to have a weapon name:

So now I can show some basic weapon stats (for the default gun):

Looking at this, I’m not actually telling the player what sort of gun it is. In other words, I am not telling the type/class of the weapon that makes sense to the player (which is different to under-the-hood weapon class). So I should add that too:

I do need to translate these values to actual text, so I need a little lookup asset/table for that:

And finally to show it:

I did add the white/blue/purple border for the icon, but I don’t think that’s very nice. Also, I don’t like needing extra UI. So I think I will change the text to match instead. I do need a color lookup asset/table for the rarity then:

And I can show the weapon with a sexy colorization:

I can probably add more stats and info and whatnot if I want to. But it’s already presentable, so first, let me do the gear in the same manner.

And then the display, same way as weapon:

And now I have a basic nice full-screen info screen for player’s stuff: 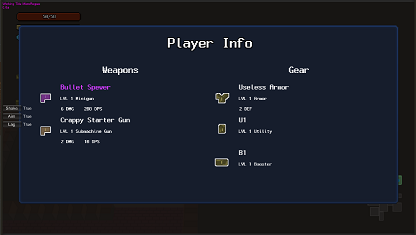 Of course, I’m forgetting the player’s main stats (you can see them in gameplay, but still), so let’s add those too:

I am also showing the inventory amounts, which is currently the scrap amount:

As with other things, I want some more collectible stuff. I am just not sure what to do with it exactly. Repair, may be?

Finally, I need to wire the input/navigation and add a button to actually be able to toggle/exit the panel properly:

Now that I have an idea of what I will show about weapons/gear, I am removing the description field (for now, anyway), because I don’t expect to show it:

I mean, I still have to figure out what to do for the other 2 gear types…

And that about wraps it up for the panel. The biggest design challenge here is to keep the features to minimum, have the fewest possible UI elements, and just generally not add more work for myself than necessary.