Next big placeholder-making and asset-organizing and sprite-planning task is the enemies — enemy mobs and all their stuff. Again, like tiles, this started as a fix-up (although I already expected it to be more than tiles) and quickly grew to a hundred little tasks.

First thing, I don’t have the current mob definitions fully finished. My mobs have 3 variants for each “archtype”:

So I need to first add the other ones, and make sure they even appear in the levels: 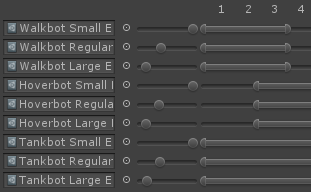 Which made me think about how I am approaching this design. Do I really want to have minor differences between mobs? Like, does the player care about a mob having small changes? Does it justify the time and art involved?

So I decided to pull the plug and trim my list to the enemy arch-types and not have variations:

In short, I’ll make enemies unique instead of making semi-pointless variations of the same types of enemy. This will also mean less animation work, and less sprite work. Although it will also mean less variety and so greater accent on providing uniqueness. (I just think back to games like WoW or Borderlands and whether I can name differences between the same types of mobs. I remember the mobs and the way they were unique, but hell if I remember how one wolf differed from another.)

The three I have I decided to make into a small-and-fast hoverbot, a heavy-and-slow tankbot and an in-between walkbot. So they have a design direction and (to get technical) their parameters represent this design by exaggerating non-default values.

Since I’m trimming the enemy list, I can give them each a unique weapon instead of my current good/bad/whatever design:

While I’m adjusting weapons, I can also update the projectiles. In fact, I will use three basic enemy ones for now:

I think I will make these sharply contrast my dark background and add a red “shine”:

And have the player’s ones blue for some visual difference:

Of course, all this will need proper art and such.

So now that I have a mob asset “pattern”, I can add the remaining mob definitions for a total of eight:

Eight is a somewhat arbitrary number. I already planned some 6 bosses. I think that’s about the number of mobs I can expect in this pass.

I also need to add their weapons and selections thereof:

And animators and death setups:

And now I can clean up my sprite atlas, move everything to right cells, and add debug codes to all:

And drag all of these between assets back and forth until everything’s assigned and I am back to where I “started”:

But now I also have all the placeholder sprites:

Now, I need to do a similar thing for all the death parts:

However, these don’t nicely correspond to the mob they are from. I’ve spent so long looking at my mob sprites that I am kind of mentally stuck in the visuals. So each of the single mob types needs multiple parts:

But now that I have trimmed the mob types and “made them unique”, the parts will also be unique. In fact, I rather have per-mob style and color and per-mob death parts then. So, without further ado:

I do have to restructure my death path setups now. Basically, I no longer have part designations and each mob’s death setup can just specify the sprite directly and any of the selection values:

I will probably also reuse the same parts for bosses, just more of them. Which means I’ll color code the bosses. I have a vague notion of what I will do with them, but they will likely be the uber-version of each mob’s arch-type with some extra gameplay. Although I have 6 bosses and 8 mobs and… we’ll figure it out! May be I’ll have all bosses have the same style. In fact, my boss mobs will have to have another pass later.

I’m also removing experience and everything related to it.

In the end, it’s just a lot of extra work — system itself, all the enemy values, feedback, UI, leveling, awards, etc. It’s a whole array of mini-features that are not really something I have time to do. It will remove that RPG-ish element I really want, but I have to make these “sacrifices” in order to finish this.

Now I might as well clean up the player stuff.

Firstly, as I’m adding sprites, I just look at my player’s multi-animator setup based on equipped gear parts and I think how time-consuming that is. Why didn’t I just not add this feature? So, in short, I’m removing all of that:

If the player ever has multiple sprite-sets, then it will be a different avatar and not this gear-based swapping. I’d love the feature to be a fully fleshed swap-your-part mechanic, but it’s currently out of scope.

I can also make them die with custom death parts as well:

Well that all concludes a large part of mob-related asset content work I need to do, at least the placeholderish structural and planning parts. A lot of it is fairly usable without even tweaking a lot, but of course I will need way more adjustments to make it presentable (or until I run out of time). But I don’t have sprites and they don’t have proper part layout and animation. I also don’t have unique weapons of behaviours.

I might work on mobs next or may be bosses or may be just do more placeholdery stuff for all the other places that need it.