Time for another intermission of minor fixes — bugs, tweaks, missing small features, and other things classified as “tedious”.

So I have holes in walls: 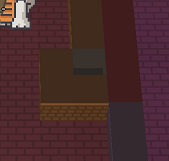 This means I get a bunch of redundant wall segments:

I had to fix full-scale UI/HUD rendering, because my pixel-perfect native size was not working for a full width/height: 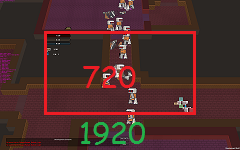 I had been adjusting all my UI sizes, so I made a script that can quickly resize the uGUI sized to a given multiplier:

I also finally fixed my navigation logic to allow for multiple UI panels to co-exist. I can now specify a window as “modal”, which means it will be the only one providing navigation controls: 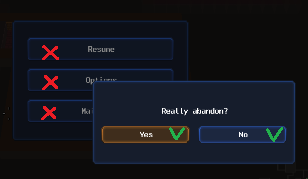 My damage number looked off for bosses:

In fact, the problem is that damage number don’t care about mob sizes, which means I need a per-mob vertical offset. First, I want to separate damage number options from the actual number script:

Then make the list of offsets that I can use for each entity size: 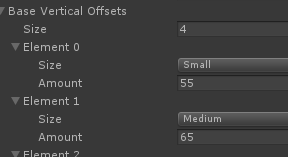 I had to convert “mob size” to “entity size” because barrels can take damage too and I needed to specify their size as well. Anyway, this works:

An issue I have is with sorting dropped items that can clip into walls:

I had to adjust a bunch of properties to make them not clip, but it also means the player now walks “over” items:

I added a bunch of weapon firing sounds and variations some time ago:

I never got further with this, but it’s a start.

I also got rid of everything difficulty-related, because that’s just too much to balance:

One experiment I did was to have mobs hold their weapons “behind” them when aiming up. This needed a custom layer for mob weapons:

Unfortunately, this looked kind of silly, so I didn’t use it:

I had a bunch of sound direction-relation bugs, like where the sound came when the player dies (and the player object no longer exists) or how continuous sound effects (like portal buzzing) correctly orient themselves. I have to store player’s last seen position versus actual position in case the player dies, for example.

I also added a simple backup save maker in case saving completely crashes and leaves an empty save or something. In that case, user can manually restore a previous one. I do really need an automated restoration, but it’s too much work right now. Just having backups is more than most games do.

There’s a bunch of other minor things that need maintenance and tweaks that I stumble upon all the time. As I said last time, these seem to take up an inordinate amount of time. Time sure flies for my 3-moth project, ahem. But, at least, I’m going in the right direction even if that means I am chopping off more features than I’d like.